“We just need the oil mist extracted from the hall and I don’t want any hassle with that”. That’s why Lucien Heemskerk, of Heemskerk Fijnmechanica in Waddinxveen, had 3nine oil mist separators installed on seven of their machines. The oil mist separators, distributed in the Benelux area by the company Glavitech, not only ensure better air quality in the shop but also lower the temperature in the machine tool and the coolant tank.

The family-owned company Heemskerk Fijnmechanica specializes in CNC milling and turning of high-quality products, based on a variety of customer specifications. The company also manufactures vacuum moulds for the food and non-food products packaging industry. Heemskerk has an extensive machine park consisting of about 50 CNC machines, 13 of which have robot loading. This allows them to be flexible in the specific needs and requirements of their clients.

Heemskerk Fijnmechanica is constantly investing in machines and automation. In 2016, eight 5-axis machines were installed and this year they will install a ninth, all with a robot in front. There are 23 CADCAM stations in the hall, which all employees have access for programming. “All our investments are aimed at moving ahead,” says Lucien Heemskerk. “To be able to work more efficiently, thus reducing costs. Because you have to be realistic: machining is a fiercely competitive market, now more than ever. Nowadays, quality is very important at the same time as the price is becoming the determining factor.”

Investments are also made for the work environment. Heemskerk is committed to being a first-class employer creating a safe and healthy work environment and want the efficiency gains that can be achieved in doing so. There are three air conditioners on the production hall roof that end up removing the unhealthy oil mist* that is released into the air during the machining process. New machines tools are always bought with an oil mist solution. Heemskerk has had different types of oil mist solutions over the years, all using filter cartridges and or electrostatic filters. But those filters become polluted, affecting their operation, a fan breaks down from time to time and sometimes a wire snaps. The operators don’t clean the extraction on the machine, so you always need to hire cleaning services. Eventually, you need to replace them. In short, if you look at it critically, the [traditional] systems have some good qualities, but they’re not complete. They require a lot of maintenance and you often have problems with them. The maintenance costs creep up unnoticed and that adds up to quite a lot.”

Separation instead of filtering

Lucien Heemskerk had looked at oil mist separators offered by the Swedish manufacturer 3nine before but was put off by the price. However, when they once again experienced trouble with a huge cloud of oil mist in the production hall, they realized they needed a better solution. They called Pieter Glavimans at Glavitech, the 3nine distributor in the Benelux area, and ordered six oil mist separators. As the name of these units indicate they don’t filter, they separate.

With traditional mechanical technologies, the contamination is collected in filter media and in the electrostatic units, several charged filter plates are used. The innovative 3nine separator physically separates the fluid particles from the processed air, offering recovery of cutting fluids for reuse, clean air and helps to keep a constant temperature in the machine tool. The 3nine oil mist separators use a rotating disc stack that cleans the air to 99.9% down to 1μm without a filter. The remaining 0.1% is removed by an H-13 grade final stage HEPA filter, that has a life expectancy of between 2 to 3 years under normal operating conditions.

Separation prevents frequent maintenance and the regular replacement of filters, while one has a constant vacuum in the machine’s processing space. 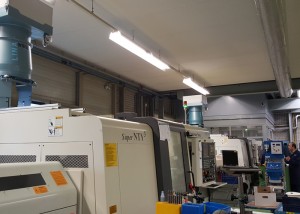 Heemskerk Fijnmechanica has dealt with large machine tool polluters in their machine park. For example, the lathes that often end up running with twin turrets. For the Nakamura-Tome lathes that run 24/7 it was decided to use the Lina 500 from the 3nine BLUE LINE series. The oil mist separators from the BLUE LINE series produce air flows from 300 CFM (500 m³/h) up to 1800 CFM (2500 m³/h) and are suitable for cabin sizes of 176CF/5 m³ up to 710CF/30 m³. The smallest model is the Lina 500 and is designed especially for small, enclosed machine tools with a cabin volume of up to 5 m³ and produces an air flow of up to 500 m³/h. The oil mist separators from 3nine are mounted directly on the machine tool, which saves on floor space and unnecessary piping.

Heemskerk Fijnmechanica also purchased a Clara separator that was connected to two machining centres. The Clara is suitable for machine tools with a cabin size up to 10 m³. All 3nine separators are installed with a CIP (Cleaning in Place) which is an automatic cleaning system. The CIP keeps the discs and rotor clean by periodically spraying them with clean coolant from the machine tool.

This way, the separators are low maintenance and you don’t have to worry about it for years. That’s what I want.

The oil mist separators have been in operation for almost half a year now and although Heemskerk and his staff have already noticed that the air has become a lot cleaner, he wanted to measure it. “We have measured the air coming out from the oil mist separator and we were shocked in a positive way. We could see a value of 0.004 mg/m³, while we were on 14 mg/m³ with the old system. So, that was really just a chimney.”

In addition to the clean air, the 3nine oil mist separators bring even more benefits. Due to the high air flow and high degree of separation, heat is discharged effectively. The temperature in the machine tool remains consistent, even when machining 24/7. A constant machine tool temperature is a major advantage when it comes to dimensional and repetitive accuracy of production, as software-based temperature compensation from the machines is not 100% flawless.

There are also advantages related to having cooler lubricants, specifically their lathes that have multiple turrets and spindles, are equipped with several cooling pumps and all draw from the same cooling tank. This used to result in a temperature increase in the cooling tank but according to Heemskerk’s own measurements, the cutting fluid temperature has dropped from 34 to 24.4 degrees C thanks to the 3nine oil mist separator. “It involves a 10-degree temperature difference, on average.“ says Heemskerk. “Lower temperatures mean less instability, foam formation and bacterial/fungal infection.”

For him, there is no doubt that more oil mist separators from 3nine will be installed. “To install six systems all at once was a large investment for us, but from now on we will have them installed as standard with all the new machines. Then you don’t notice it so much. Besides clean air, the oil mist separators also generate a more reliable process. And that’s what you want, certainly for robotised 24/7 processes. In the end, you will always need to invest in extraction equipment from a health and safety point of view. However, all the maintenance you spend on this equipment will accumulate and at some point, you will need to recover them. If you find something where the failure rate drops considerably, then it becomes feasible.”

The article is freely translated from Dutch to English. You can find the original article here.

A successful trade show in…
All posts